It’s name is ‘Panorama’ and it is the annual music competition of steelbands from Trinidad and Tobago.

The first official Trinidad Panorama took place in 1963 and it was the chairman of the Carnival Development Committee at the time, Ronald Jay Williams, who gave the festival its name which is taken from the word ‘pan’ which is the name Trinidadians call their national instrument- which has erroneously been dubbed the ‘steel drum’ outside the island where the instrument was invented/developed.

The Panorama competitors are large bands of a minimum 40 players and compete in Single Pan, Small Conventional, Medium Conventional and Large Conventional categories, however they are all called ‘steel bands’.

As someone who runs his own small steel band it does disappoint me when people refer to Solid Steel as my ‘steel pan band’ and I’m horrified when they refer to it as my ‘steel drum band’.

So just to set the record straight, I prefer it if it’s understood that Panorama is not just a competition, but a celebration of Trinidad’s national instrument, the ‘steel pan’ or ‘pan’ and those taking part are mostly playing pans of different tonal ranges alongside their rhythm sections made up of other percussionists.

The music they play is locally described as Panorama music, because although steel bands can play any genre of music from ‘popular’ to ‘classical’ (all of which Trinidadians call ‘steelband music’!)- for the Panorama contest they are required to play a certain style and the judges demand certain elements be included in the performance.

So what defines a Panorama musical piece?

Well, there is no better way to showcase this national folk instrument than have it play the national Trinidadian folk music style that long ago gained international recognition (thank you, Harry Belafonte)- the music genre we call ‘calypso’.

Each steel band plays a popular current calypso that is highly arranged into an 8 minute piece with original introductions and key variations- similar to a classical piece- but to an infectious uptempo calypso rhythm.

The calypsos are written by calypsonians who historically have written some songs that are more harmonically and melodically sophisticated with a broad range of ideas that would feed the imagination of any musical arranger tasked with writing a purely instrumental arrangement.

The greatest writer of Panorama-winning tunes was the calypsonian, Lord Kitchener. Even though he passed away in 2000 and only saw 36 Panorama contests in his lifetime, his tunes were the choice of 19 Panorama-winning performances and from the mid-sixties to the mid-seventies, he enjoyed a run of 11 straight wins. To put his fantastic achievement in even better context, no other composer has contributed more than 4 Panorama-winning calypsoes.

Nowadays, Panorama arrangements are as complex as ever, even though the songs that are their source tend to be much simpler than Kitchener’s!

The players of each band will have spent months learning to play their parts being drilled on almost a daily basis by the arranger and his section leaders.

Great dexterity and rhythmic timing are crucial to deliver the best possible performance and before the finals the instruments all receive meticulous attention from each band’s tuner.

He or she must write an arrangement that will thrill the crowd and impress the judges. The standards of playing are so high that it is commonly the arrangement that is favoured by the judges that wins the contest for any steel band!

Not many of the arrangers and far less of the players have any formal education in writing or reading music, so the arrangement is largely conveyed via verbal instruction and demonstration.

But the players all have excellent percussion skills physically and come together in what is a fantastic community effort to produce the musical performance demanded by the arrangement.

And ‘community’ is so important here. There are so many players and so many practice nights that socially band members become family whether or not they are actually related.

This community is a very diverse one too. In any Panorama steel band in Trinidad you will find that the players’ ages will range from 10 to 70. There will also be as many female pan players as there will be males and the racial mix will reflect the make-up of the island, with people of African, Indian, Arabic, Chinese, Japanese and European descent all involved.

Apart from the local players many fine players from the USA, Japan, Britain and other parts of Europe travel over to Trinidad to play with some of the bigger better-known bands like the Renegades, Desperadoes, Silver Stars and  Phase II.

Everyone combines on Panorama Finals night so that visually and aurally the performances are stunning with over a 1000 players in total taking part with an audience of 20,000 people cheering them on.

In an island population of only 1.2 million people, those are impressive figures indeed.

Scoring well on Panorama Finals night earns the bands prize money, with the winning band getting $1,000,000TT (which translates to in excess of £10,000).

But it really is the bragging rights that bands most value from a Panorama win. In any one year there are likely to be 3 or 4 equally strong contenders for each contest.

The Large Conventional Band category is the ‘heavyweight’ title at Panorama and 2 of the most popular steel bands, Renegades and Desperadoes currently have each won the title 11 times.

Panorama does have its critics, however.

It is a contest and just like a sporting contest it has rules and guidelines as to how performances are ranked. As such certain musical techniques are now commonly found in many contemporary Panorama arrangements, because they are known to win points.

For some arrangers the artistic shackles feel sufficiently inhibiting that they don’t really care about how the judges- who they feel are poorly qualified to adjudicate anyway- score them. So they don’t care about winning Panorama- or so they claim.

I suspect that a ‘surprise’ win for those detractors would be very welcome. And I also suspect that their hope for Panorama to ‘evolve’ into a music festival without any formal judging one day is but a pipedream.

Trinis love a contest. For most of them Panorama is ‘we ting’ meaning that it is something that they believe belongs to them culturally. They don’t want it changed in any way nor do they want it to migrate anywhere else. They don’t want Panorama or steel bands to be associated with anywhere else but Trinidad.

Many top-flight players and arrangers would like to see steel band music embrace other musical forms like jazz more willingly, but there is little appetite for this from Panorama aficionados.

Panorama is, after all, for those fans at least- the greatest folk music contest in the world!

By the time you read this the results will have come in from the Queens Park Savannah in Port Of Spain, Trinidad where on the eve of the pre-Lenten carnival the finals of a music competition were held.

This is an annual music contest the likes of which would be very unfamiliar to most of us in the UK. It is, I would argue, a folk music competition which may be unparalleled internationally. 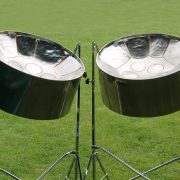 The reputation of one school’s steel band is so high that locals turned out in full force last weekend to see the group perform, despite the wet weather.

Members of the Whitmore High School Steel Band gave the performance of their lives at Pinner Memorial Park on Sunday (July 29th), This Is Local London reported.

They opened the Concerts in the Park event at 14:30, which was being hosted by the Pinner Association.

Local residents were invited to bring a picnic and a chair to watch the show, and due to the adverse weather, many turned up with umbrellas and raincoats as well.

Despite the heavy rain, a spokesperson for the Pinner Association confirmed both performers and the audience had a lovely time.

They stated: “We knew that come rain or sunshine the band would still play on and nothing would dampen their enthusiasm.”

Following this performance, Fats Rollini Jazz and Blues Band will take to the stage this coming Sunday (August 5th) at 14:30. The Stardust Big Band will perform the following week (August 12th), and Grimsdyke Brass Band will wow crowds on Sunday August 19th.

Admission is free and anyone can come along to see the talented musicians perform.

Steel bands are becoming increasingly popular in schools, and one establishment in Wanstead celebrated its 100th birthday with a performance from its own steel band.

St Joseph’s Convent School hosted the show as part of a full day of celebrations, the Ilford Recorder reported, which also included drama workshops, magician performances and a picnic for all the pupils.

To find out more about steel drum lessons in London for your school, get in touch with us today. 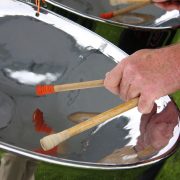 An all girls school in Wanstead has been celebrating its centenary with a host of activities and events, including a performance by a steel band for pupils and staff.

The Ilford Recorder reported that St Joseph’s Convent School chose to celebrate its 100th anniversary by putting on a day full of fun activities for its current pupils.

A big marquee was erected in the school’s grounds, where the girls currently studying there were invited to take part in creative and drama workshops, as well as to listen to the steel band performance and see a show by a magician.

The day also saw all the children enjoying a picnic together in the sunshine. A centenary disco and summer fair were also organised as part of the festivities.

Headteacher Miss Christine Glover told the news provider that the event was “a lovely way to celebrate such a big milestone in the school’s history”.

She added: “It was a wonderful opportunity to celebrate all our fantastic achievements so far, and a chance to look forward to the future.”

This kind of event offers a great opportunity to introduce children of all ages to different creative activities, whether musical, drama or otherwise.

Last month there were calls from some in the music industry to encourage schools to put a greater focus on music in the curriculum, with many fearing that failing to get children interested in learning a musical instrument at a young age is one of the factors affecting the number of teenagers who go on to study for a GCSE or A-Level in the subject.

If your school would like to offer steel drum lessons in London to your pupils, contact us today to find out how we could help.