A number of musicians and musical organisations have come together to urge schools not to give up on providing music education for youngsters.

The BBC spoke to a number of people within the industry at the recent The Great Escape Festival, where band Wolf Alice said that if they hadn’t had access to music lessons at school, as well as extra-curricular music sessions, they may not be where they are today.

Diane Widderson, from the Musicians’ Union, told the news provider that they are concerned that some schools appear to be dropping A-level and GCSE music from their curriculum because they don’t have enough students to run the courses, or because it is not a subject they’re judged on.

Getting children interested in music at an early age is part of fuelling their passion – and exposing youngsters to as many different kinds of music as possible is a great way to do this.

Offering steel band workshops at your school could open their eyes and ears to a whole new kind of music and get them to think about the possibilities when it comes to learning an instrument.

Earlier this month, the Guardian reported on a letter published in the Observer and written by all the former winners of the BBC’s Young Musician prize, in which they called for all primary-age children to be given the universal right to learn an instrument at no cost to them or their families.

“It is crucial to restore music’s place in children’s lives, not only with all the clear social and educational benefits, but showing them the joy of making and sharing music,” the letter stated.

Playing steel pans is a fun and sociable experience, so this could be a great way to share the joy of making music with students from all backgrounds and of all ages. Find out more! 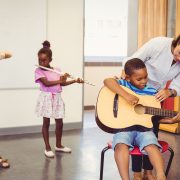 Pupils Enjoy Musical Month At Primary School
Scroll to top
We use cookies on our website to give you the most relevant experience by remembering your preferences and repeat visits. By clicking “Accept All”, you consent to the use of ALL the cookies. However, you may visit "Cookie Settings" to provide a controlled consent.
Cookie SettingsAccept All
Manage consent