Although there’s a lot that has to be covered under the national curriculum, that doesn’t mean that primary schools can’t give pupils a chance for some extra, enriching experiences during their time at school.

This is exactly what St Francis Catholic Primary School in Bradford did in May when it ran its month-long celebration of music.

The Telegraph and Argus reported on what was organised last month, noting that children at the school had the opportunity to not only try playing different instruments but also to speak to musicians and find out more about their musical talents.

Among the events run by the primary school were Live for 5 video events, where different professional musicians had five minutes to explain their specialisms, as well as sessions where children could try different instruments, such as the trumpet.

Other highlights included concerts by a brass band and a string trio, giving pupils a chance to experience a range of musical styles.

They were also able to get involved themselves with a hymnathon and extra lunchtime music clubs throughout May.

Head at the school Andrea Haines said the month-long musical celebration had resulted in more children becoming interested in singing and music.

“I have seen the significant difference music and singing has made to the lives of children and adults,” she told the newspaper.

We think this is a great idea, and if you want to organise something similar at your school why not consider adding steel band workshops to the mix?

There have recently been calls from professional musicians for there to be a greater focus on music in schools, both primary and secondary, and this could be an excellent way to introduce more children to the varied instruments and musical styles out there. 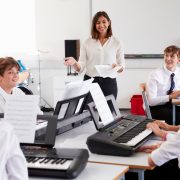 Calls For Schools To Focus On Music

Calls For Schools To Focus On Music

Steel Band Features In Girls’ School Celebrations
Scroll to top
We use cookies on our website to give you the most relevant experience by remembering your preferences and repeat visits. By clicking “Accept All”, you consent to the use of ALL the cookies. However, you may visit "Cookie Settings" to provide a controlled consent.
Cookie SettingsAccept All
Manage consent